According to National Energy Transformation Office (NETO) Director Toh Wee Khiang, in order to reach the target of 1.5 gigawatt-peak (GWp) installed solar capacity by 2025, the rooftops of public and private buildings, reservoirs and the sea will be the key spaces used for solar panels deployment. Here, solar panels are fitted on the sheltered walkway at the Singapore Discovery Centre (pictured). Photo and article source: Lianhe Zaobao © Singapore Press Holdings Limited. Permission required for reproduction.

Rows of solar panels lining the roofs of many buildings form an “eco” skyline that has become increasingly visible and common in Singapore in recent years.

In comparison to other clean energy sources such as wind and hydroelectricity, generating solar energy is the best option for Singapore, based on current technological capabilities and economic benefits.

Although the country is located near the equator and enjoys abundant sunlight, scarce land and a dense population mean that extensive planning is necessary to make space for large-scale installation of solar photovoltaic (PV) systems. Singapore’s current target for solar capacity is 2 gigawatt-peak (GWp) by 2030. Spaces such as rooftops, temporarily vacant land, reservoirs and the sea will be the main sources for deployment.

Singapore is also actively driving R&D projects, with the hopes of materialising new concepts into practical application in the future.

Despite its geographical limitations, Singapore has never given up on its goal of driving clean energy transformation — it has managed to increase the installed solar capacity by over 1,000 times in the last 12 years. With a new target set in mind, this number will continue to rise, though it remains a challenge sourcing the space to install solar panels.

In 2008, Singapore’s installed solar capacity was merely 0.4 megawatt-peak (MWp), equivalent to 0.0004 GWp. An installation of a larger scale took place in 2013, when a 1 MWp solar PV system was deployed atop the Keppel Seghers Ulu Pandan NEWater Plant.

Since then, the growth rate has accelerated and the total installed capacity of solar PV systems was 427.6 MWp in 2020, which is a thousand-fold increase from that in 2008. The government has set a target of increasing the installed capacity to 1.5 GWp by 2025, and to 2 GWp by 2030, which is about 3% of Singapore’s total electricity demand.

In 2017, the National Energy Transformation Office (NETO) was set up within the Energy Market Authority (EMA) to synergise energy development efforts across different government agencies. One such example is the “Singapore’s Energy Story” project, which drives the switch to natural gas, solar, regional power grids and emerging low-carbon alternatives.

Energy is a topic that spans across different departments, explained NETO Director Mr Toh Wee Khiang in an interview with Lianhe Zaobao. As such, NETO develops strategies based on guidelines from the “whole-of-government”, before assigning targets to various agencies to act on.

“Take solar energy for example, we know exactly where we can install solar systems, but different spaces are managed by different bodies, so we have to engage relevant departments to help drive the solar energy plan in their domains,” Mr Toh said.

Besides making sure that all usable spaces are maximised, Mr Toh pointed out that NETO also has to factor in system issues, such as ensuring the stability of the power grid when high amounts of solar power is generated.

Currently, the majority of solar systems deployed are on rooftops, including those of HDB flats, public sector buildings, institutions and private buildings, followed by our reservoirs and the sea. Some large-scale government initiatives like the SolarNova programme, jointly led by the Housing Board (HDB) and Economic Development Board (EDB), will deploy solar PV systems with a total capacity of 63 MWp at three reservoirs within this year.

The current installed solar capacity in Singapore is not yet at one-third of the target set for 2025. “Rooftops of public and private buildings will still be the primary space for deployment, so for the remaining 1 GWp, it's estimated that more than half of it will be contributed by solar systems installed on rooftops,” Mr Toh elaborated.

An offshore floating solar PV system located at Woodlands was completed in March this year. Mr Toh said there will be more of such projects in the future, as the use of floating systems will expand from inland reservoirs to the sea.

According to the updated “Solar PV Roadmap for Singapore” report published by the Solar Energy Research Institute of Singapore (SERIS), the technical potential for PV deployment in Singapore may reach 8.6 GWp by 2050.

Dr Thomas Reindl, lead author of the roadmap and Deputy CEO of SERIS, opined that this is not unattainable. He explained that the current target is 2 GWp by 2030, and there are 20 more years after that to make use of various innovative and cutting-edge technology to help Singapore maximise its solar potential, which includes changing old systems to new ones in order to achieve higher energy conversion efficiency.

The prices of solar panels have dropped significantly too. According to Dr Reindl, silicon modules make up 95% of the global market, and their prices have fallen by over 80% compared to a decade ago, while production costs are also expected to drop to the lowest margin.

He added: “This is owing to constant technological innovation and the increase in cost effectiveness due to mass production. Just last year alone, the global installed capacity reached 135 GWp, and the accumulated total capacity is now 760 GWp. Other countries have a surge in demand, which in turn allow Singapore to benefit from cheaper solar modules.”

Besides tapping on rooftops, reservoirs and the sea, land-scarce Singapore can only rely on constant research and development of new technologies to free up more space for solar PV systems deployment.

One such technology utilises facade areas of buildings. Although Singapore had started to trial Building Integrated Photovoltaic (BIPV) applications more than 10 years ago, the technology has yet to be widely adopted.

“The effectiveness of BIPV installations is not as ideal. As Singapore is located near the equator, the noon sun is positioned too high, thus vertical facades can only receive half of the solar irradiance compared to rooftops,” Dr Reindl explained in an interview.

Thinking out of the box when it comes to solar

Solar irradiance refers to the power per unit area received from the sun within a timeframe. If solar panels were to change colours from the standard dark blue or black because of facade aesthetic concerns, the energy conversion efficiency will be affected, said Dr Reindl.

Besides, retrofits will need to take place on a large scale if existing facade areas are to be used. Dr Reindl pointed out that a better alternative is to replace conventional building materials with solar modules so they can be integrated when constructing a new building facade. Although the costs are higher, a significant amount of power will be produced in the next 25 years, which eventually brings down the costs to be even lower than that of using conventional materials.

As for other developing technologies, Mr Toh shared that NETO is looking into integrating solar PV systems with agriculture by deploying PV systems above outdoor farmlands, while ensuring plants can still receive sufficient sunlight. This study is still in its early stage.

The updated “Solar PV Roadmap for Singapore” report also suggested other possibilities, such as PV adoption on existing infrastructure, for instance noise barriers or roads. However, these new concepts require further extensive R&D.

The substantial development in solar energy over the past 10 years in Singapore was not achieved solely by the public sector’s lead, as the private sector played a crucial role too. In fact, more than half of the installed capacity last year came from the private sector.

According to data from SP PowerGrid, as of end 2020, Singapore’s total installed capacity was 427.6 MWp. 43.5% (186.1 MWp) was contributed by the public sector, while the remaining 56.5% (241.5 MWp) came from the private sector. Zooming into statistics from the private sector, 93.8% were from private enterprises, while the remaining 6.2% were from private residential properties.

With the support from government agencies such as JTC and Building and Construction Authority (BCA), NETO has been able to connect with private enterprises and real estate developers to provide them with information on energy transformation, according to Mr Toh.

JTC launched the SolarRoof and SolarLand programmes in 2017 and 2018 respectively. It expects to reach the target of generating 100 MWp of installed capacity by 2030 on its properties.

“Sustainability has grown in importance for many businesses, hence we are collaborating with them to solarise our industrial estates,” said Mr Calvin Chung, Chief Environment Officer of JTC.

He pointed out that some companies may be worried about costs, hence the government agency encourages them to participate in its SolarRoof programme, where they can lease solar panels and purchase the generated electricity at a discounted rate, or lease out their rooftop space for solar PV panels installation and receive revenue in return.

Lease and save – a win-win situation for investors and landlords

Besides the shift towards sustainable development, Dr Reindl thinks lowered costs is also an important consideration for adoption, as the electricity generated by large solar PV systems can be priced as low as S$0.10/kWh. Hence, investors are willing to rent rooftop spaces of commercial buildings to generate electricity, and then sell the electricity back to their landlords at a lower price, thus benefiting both parties.

Dr. Toshiharu Shimizu, Managing Director of Southeast Asia and India for Yamazaki Mazak Singapore said the shade provided by the solar panels naturally reduces the temperature of the air-conditioned factory, thereby lowering the plant’s energy consumption. The company also buys electricity from Cleantech Solar and in turn saves 15% on their monthly electricity bill. It plans to increase the purchased amount in order to reach its target of 25% savings on their electricity bill.

Solar adoption can begin at home

Mr and Mrs Lin Mou Bing started to think about installing a solar PV system on their house’s rooftop a decade ago, but they dropped the idea as they felt the price then was too expensive and the technology was not widely adopted yet. A few months ago, they saw a promotional email and decided to turn their plan into a reality.

At the start of this year, the 60-year-old businessman and his 58-year-old homemaker wife spent about $30,000 with Sembcorp Power to install 32 solar panels on their semi-detached house. The system came into use at the end of April.

“During the pandemic, there were people panic-buying at supermarkets. Many supply chains were affected too. These made us realise that many accessible resources are not a given,” Mrs Lin said. Mr Lin added: “Our goods and stock are mostly imported, the supply will be disrupted when a disaster strikes, so we started to think of how we can be self-sufficient. Everyone is used to getting clean drinking water when the tap is turned on, and having light at a flick of the switch.”

In their past travels, wind and solar energy technologies had left the couple with deep impressions. The Lins also collect rainwater to wash the floors and water the plants, as Mrs Lin had picked up gardening last year and began to grow vegetables and spices in their garden.

This article first appeared in and is translated from Lianhe Zaobao, Page 6, and zaobao.sg, 装机容量12年增加千倍 寻找岛国空间留住太阳能源 on 10 May 2021. Any errors, please check back with JTC. 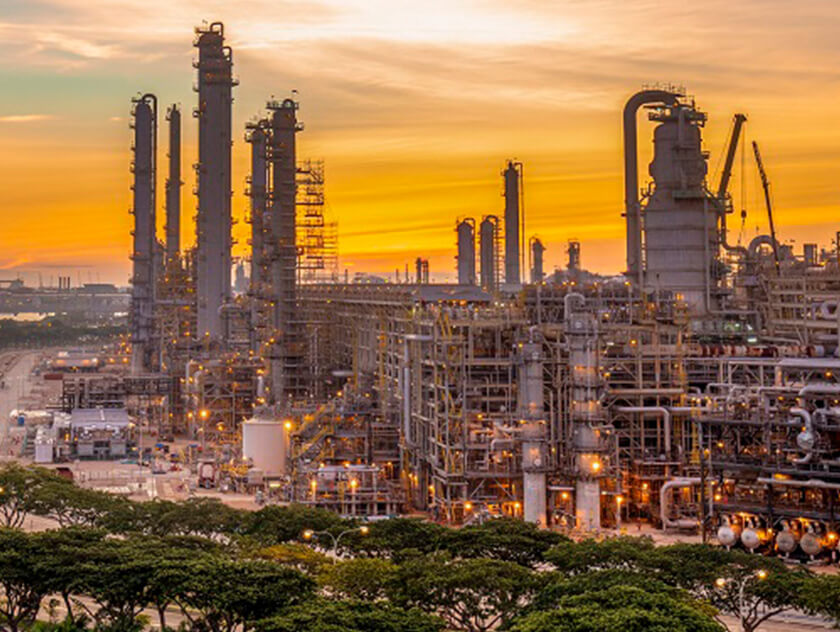 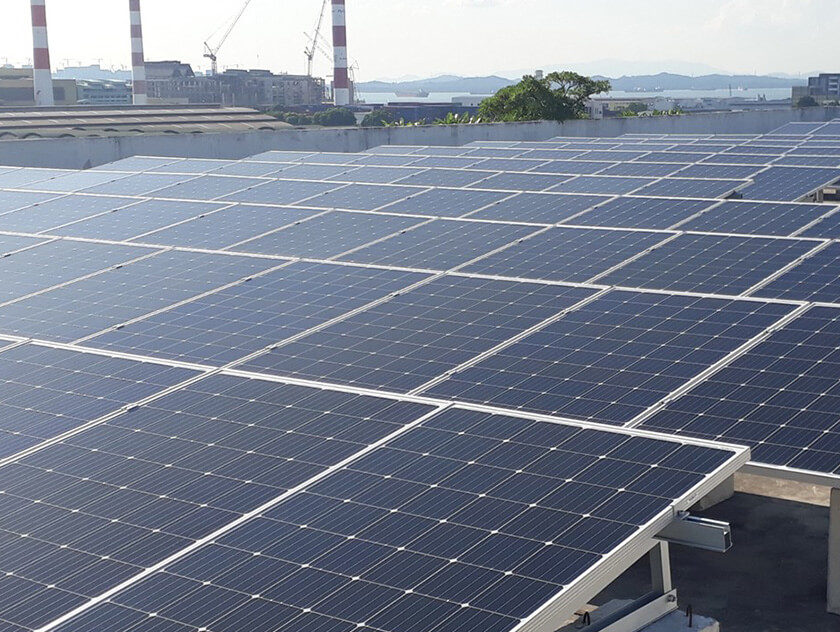 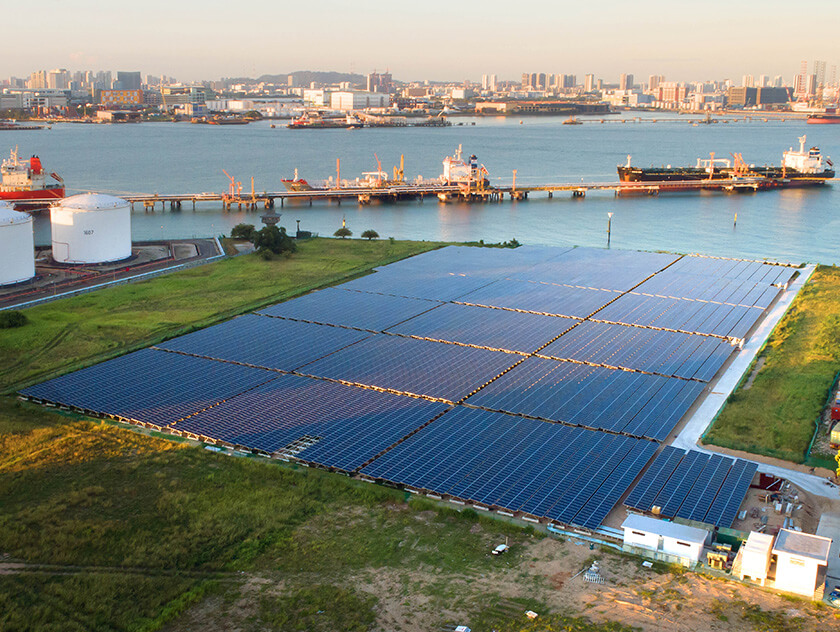